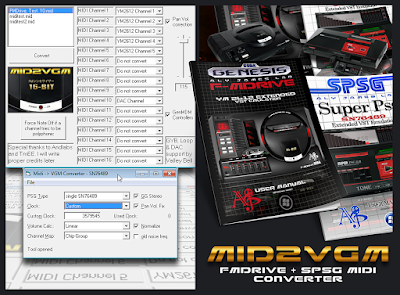 I never found the time to make some proper info and tutorials regarding the usage of these geeky tools so I decided to make a release of my custom package anyway and do tutorials later, at least it is usable with a bit of reading :D

The FMDrive MIDI, + SPSG MIDI compositions to VGM file converters are still beta but 99% stable.
The format do not support yet CSM or Special Channel Mode conversion but every other things works, including logging FM registers automation! same for PSG.
DAC PCM files are converted the same way.
That means that you can have a portable hardware compatible version of your composition and eventually listen to it on the console hardware itself...
Huge thanks to ValleyBell from VgmRip for the code works, source code and additional info are also available and open sourced directly at VGMRIP

Keep in mind these are not a "one click done" converters and that they need a bit of "geek power" in order to use them properly but you are probably kind o' nerdy anyway if you are reading this...

These are converters that will take MIDI data as input and specific soundchip parameters and output a compressed widely popular format for chiptune called VGM, While VGM is not really a "machine ready" code there are some converters that let you embed a VGM player into a ROM file, hence it makes your track playable on the real console.
The real advantage of this converter is that it will translate complex FM register automation from FMDrive that you did in your DAW into the VGM. This allows to translate pretty much any musical expression that you have recorded while performing in real time! which was something nearly impossible to translate properly using only trackers or machine code.

Basically you will need a DAW that let you record the MIDI output from SPSG VST.
SPSG VST, once MIDI output enabled, will write MIDI data for Volume envelope and Pitch, including arpeggios and pitch envelope.
A text file is provided into the package with some more infos.
You have to use CC#7 for volume data to work with the converter. Pitch if any will be sent automatically via MIDI out

Here is a video that shows the process from scratch in Cubase, it should be similar in other DAWs, it is somewhat long but once you did it once you can save a template in your DAW to do things fast :D

Also ,contrary to what is in the video, there is no need anymore to write RPN parameters for pitch, you only need to write CC#6 value = 48 at the beginning of the MIDI track that is using some pitch (bend, vibrato or pitch envelope) (SPSG use the whole range to write pitch data)

The converter will respond to:
CC7    Main Volume


You will use mainly this setting on the converter: 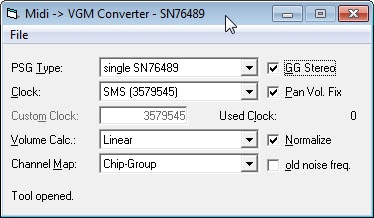 disable GG (for GameGear) stereo if you plan to make a fusion with an FM only VGM in order to have a full Megadrive tracks (the PSG is mono only on the Megadrive) and use a Custom Clock if you have used something else in SPSG VST.

To sum up:
You then have a PSG VGM that you could also later combine with and FM VGM (made with FMDrive VST) using the vgmmerge tool (see bellow)

Basically you will need a DAW that let you record the MIDI output from FMDrive VST.
If you do not use registers automation you can go on, if you plan to do, you have to load first the GenMDM preset first (included into the converter pack), this is an INIT preset that will also map each controls to the appropriate MIDI Control Change number to use the converter.
A text file is provided into the package with some more infos.
I will make a video soon anyway!

So here we go, first fire your DAW and load 2 instances of FMDrive for a start.
Make sure to load the GenMDM preset first to replace the Init preset, the mapping will remain even if you change presets.
Now make a nice bass sound or import a tfi preset as a basis and tweak it, record a part, make sure it is mono. If you plan to have chords you have to split it onto multiple channels, one note per channel (there are some free MIDI plugins that would do that for you :) I will find the name and put a link here later)
Once done make sure to save your preset as a .tfi somewhere (you can save it in the converters TFI folder for example)
Now do the same with the other instance of FMDrive, do whatever you want but make sure it is mono.

You should now have 2 tracks and have saved 2 tfi presets.

Now it is time to configure the presets for the converter, for that you will use 2612edit.exe
Basically you will have the option to attach your presets to MIDI patch numbers, in GM MIDI the first patch is named : Acoustic Grand Piano so let's say you have saved a preset called Ch1.tfi you need to attached that .tfi preset to Acoustic Grand Piano (MIDI program 1) so when the converter will process your exported MIDI ans see Midi Program 1 attached to a channel it will use the .tfi preset.
It is a bit hard to understand at first but very easy in use. 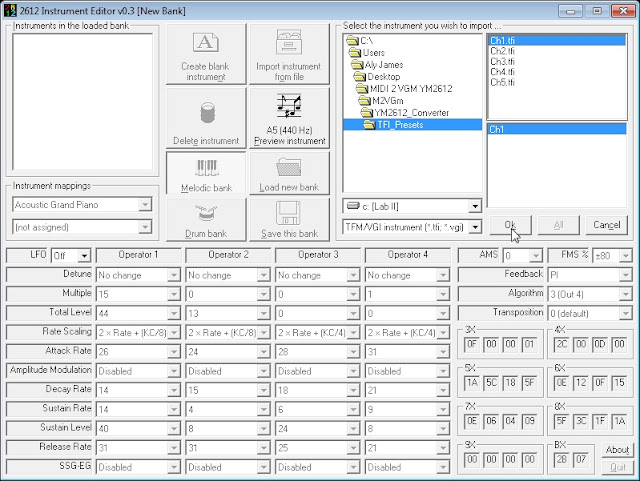 Next select the mapping for Acoustic Grand Piano and select your tfi preset that is already loaded into the bank. 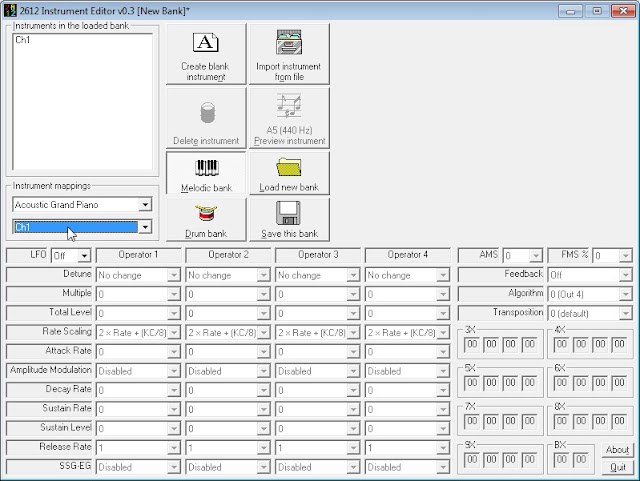 Next repeat the process and import your second preset into the bank, then select the second MIDI instrument "Bright Acoustic Piano" and map it to your second freshly imported tfi preset. 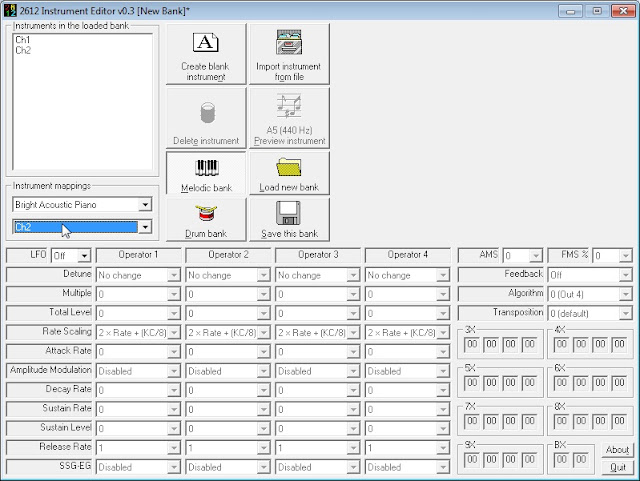 Next save this bank as Instruments.gyb (overwrite the existing one) this bank will be used by MIDI2VGM.

Now it is time to set up your MIDI file in your DAW.
Basically at this point you have 2 FMDrive channels with MIDI notes, save your song just in case.
Now for a cleaner view open 2 new MIDI only tracks and copy the MIDI notes part of each FMDrive channel to its respective MIDI channel.
At this point you can get rid of the FMDrive VST instances.
You should only have 2 MIDI tracks left.
Let's adjust the MIDI parameters of the MIDI channels, set one to output on MIDI channel 1 and the other to MIDI channel 2, set the first track to the first MIDI program 1 (or 0 depending on the MIDI implementation of your DAW) and the second track to MIDI program 2 (or 1 if the first was 0)
By doing this, if you are still following, the first program will be mapped to the first tfi preset and so on, this is the mapping we did in 2612.exe
(If you have used any pitchbend make sure to add CC#6 with a value corresponding to the pitchbend range set in FMDrive for that track/channel) basically add a MIDI event at the beginning of the channel: CC#6 value= 12 (if pitchbend was 12 semitones)
This is also a good time to verify any PAN parameter.

Now you are ready to export the MIDI file, once done copy the MIDI file in the same folder as midi2vgm.exe then launch midi2vgm.exe and load your MIDI file.
Set it like so: GenMDM Controllers ticked, volume slider to 127.
Select your MIDI file and first make sure no channels have overlapping notes by clicking on "Force Note Off if..."
Now click Convert and...WAIT it IS SLOW that's Vintage ahaha :) 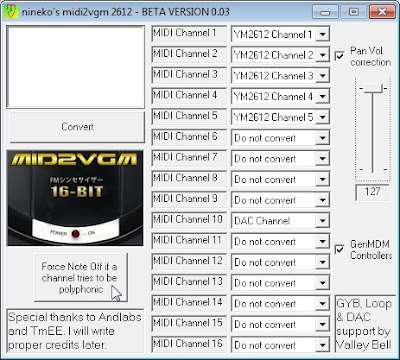 Done, the VGM should be next to your original MIDI file.

Remember to first load the GenMDM preset before creating any sound! (you could also simply MIDIlearn manually the parameters you are planning to use using the provided MIDI CC MAP in the converter pack...)
Make sure you save your sound as a tfi preset BEFORE you applied any automation, this will make sure your starting point is still the same.
Now let's use the same track or make another one but let's record some registers automation, like Modulator operators levels :), write some crazy automation or use the FMDrive GUI and move sliders while recording automation.
Once done, repeat the process above.

PS: remember that using automation will create a lot of busy state for the real hardware YM2612 so stay gentle if you plan to use it alongside a lot of PCM samples and the whole 5 channels.

You can use the DAC channel to have samples playing, again think of it as mono, one sample at the time.

You can use the same samples you are using in FMDrive with the DAC function. So let's make a drum track with FMDrive using the DAC, import 2 samples into SLOT1 and SLOT2, let's say kick and snare, make a beat.
Save this as MIDI with the channel set to 10 (see above)
now copy your .wav samples you used into FMDrive into the DAC folder of the converter and edit the DAC.ini file with a text editor and use this code: ( the H24, H26 are Hexadecimal notation for MIDI notes btw)
; Bass Drum H
[&H24]
File = DAC\YourKickFileName.wav
Freq = 0

Now convert your MIDI file with mid2vgm.exe, it is by default set to search for DAC on channel 10 and disabling channel 6 FM part (you now about this if you know YM2612)

To sum up you can use all of the above together to convert a full blown 5 FM channels + 1 DAC channels track.

Again I will make some video for it, I know it is not the easiest thing but you should make it work with a bit of use.

Please do not ask for much support as it is a free set of tools and I am MEGAAAAAAAAAAAAAAAAAA (say it reaching a very high note)  busy, so if any questions make sure you tried everything before sending mails :D

You can merge the FM part made with FMDrive VST and the PSG part made with SPSG VST to make a complete Sega Megadrive Song, the tool in use is vgmmerge.exe, it will merge both VGM.

To edit your VGM files (naming etc) use VGMtool.exe
(infos inside)


More info will come next regarding how to play a VGM onto the real console...
That was a long post!