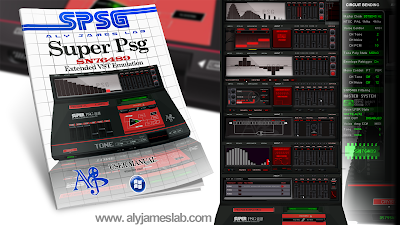 It features band-limited waveforms to have a nice analog sound with no aliasing.
All you need to squeeze the hell of a square wave
Including Timer Modulation Tricks, High speed modulation (up to 300Hz), PCM sample import that can be played through the chip volume register witch gives them a unique sound (PCM or PWM way) etc...
Some tracker like "tables" and a unique way of circuit bent the Noise channel! witch basically gives you the ability to reach some ATARI 2600 like metal noise or mess it up in a unique way, all of that in real-time.
Almost everything can be automated or MIDI learned.

Basically the main features of SPSG are:
SN76489 Sega Master System/ Genesis Version Emulation + some extended features (see timer modulation for example >> http://chipmusic.org/forums/topic/12185 … 80-hblank/ )
in order to make some advanced sound out of the simple PSG.

Can also work as a controller for a modified version of the Little Scale's open source SN76489 interface that anybody can build!.
It will be available on the same basis as FMDrive Vsti (YM2612 emulation) with a minimum donation.